The Charleston Boulevard Rod Run & Doo Wop will fill Kanawha Boulevard with classic cars from tomorrow (Thursday) through Sunday and bring thousands of visitors to Charleston for the annual event.  As a result of preparation for the event, traffic will be affected starting Wednesday at 6 p.m. along the Boulevard, and other traffic restrictions will occur Saturday afternoon and evening in conjunction with the fireworks show that night.

Starting today at 6 p.m., Kanawha Boulevard will be closed at Brooks Street with one west-bound lane open for traffic to Capitol Street, where all traffic will be diverted.  Although one lane of traffic will be open between Brooks and Capitol streets, people driving from the east into or through downtown should turn right onto Brooks Street and left on either Quarrier or Washington streets to avoid the congestion that is expected closer to Capitol Street and the official car show entrance in that area.

One westbound lane of Kanawha Boulevard will also remain open between Clendenin Street and Pennsylvania Avenue for access to restaurants and other businesses on that block.  The Boulevard will be closed at the other end of the car show (by Magic Island) at Ohio Avenue.  Some side streets will also be affected with restricted traffic and parking:  the full unit block of Laidley Street (between the Boulevard and Virginia Street), the unit block of both Goshorn and Truslow, although traffic will be permitted from Virginia to and from the Spilman building driveway, halfway down the block. 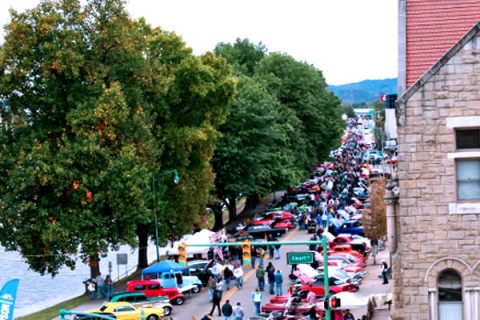